Mohamed Morsi, Egypt’s former president that was ousted during the Arab Spring event and its successor, Abdel Fattah al-Sisi, installed after the expulsion, has recently died, with reports ranging from The New York Times (web archive link here, in case reading restrictions are in place), to CBS News, with the additional claim “that he had “many secrets” he could reveal”, and the BBC stating that an independent investigation is demanded for the death of Mohamed Morsi, especially when he was detained in solitary confinement with inadequate food and medical supplies, which, even if confirmed without doubt, is a morally and ethically repulsive thing to do, so much so that it has been branded as a “murder”.

Those who have paid tribute to Mohamed Morsi in the news article realm are Yvonne Ridley, former Taliban detainee and journalist who has branded the situation as “a political assassination by a vindictive regime” (talk about shoving neoconservative propaganda lingo up Satan’s backside), while making additional claims that Israel benefitted from Morsi’s political demise, a legitimate claim that is reinforced by MintPressNews’ writer/journalist, Whitney Webb with her article, IDF General: Israel Behind Coup that Installed al-Sisi Dictatorship in Egypt and the Press TV article focusing on the same subject, alongside emotionally strong tributes from Recep Tayyip Erdogan (branding Morsi’s ousters as ‘tyrants’), Malaysia’s Foreign Minister Saifuddin Abdullah, Hamas (crediting Morsi for his support for the Palestinian cause), and others (here’s some more by the way).

There are additional tributes being paid to Morsi in the social media realm, echoing the same sentiments as the ones made by the writers and known political figures, ranging from those made by TRT World’s Deputy News Editor, Khalil Charles and ex-Jordanian Queen, Noor al-Hussein, to everyone else across the world. 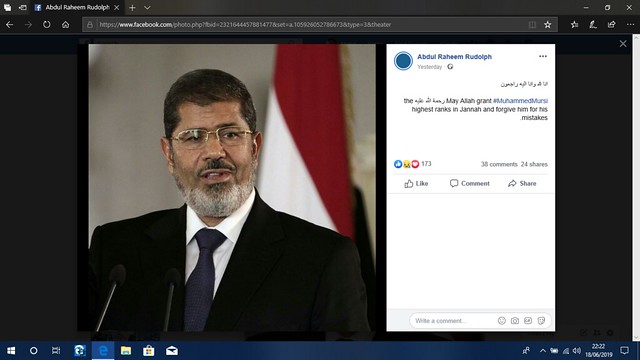 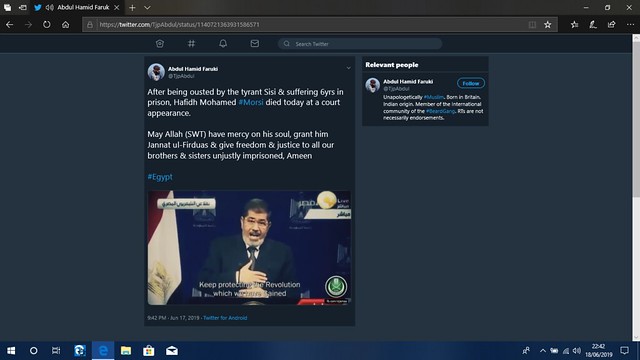 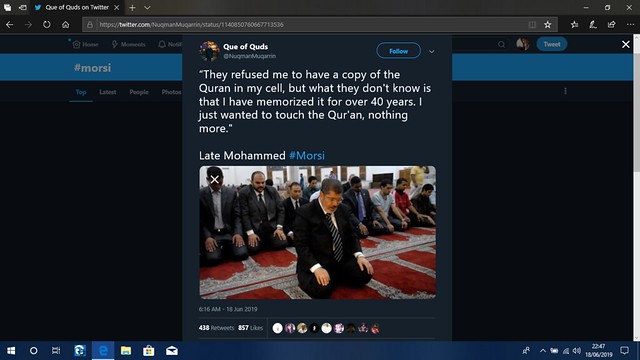 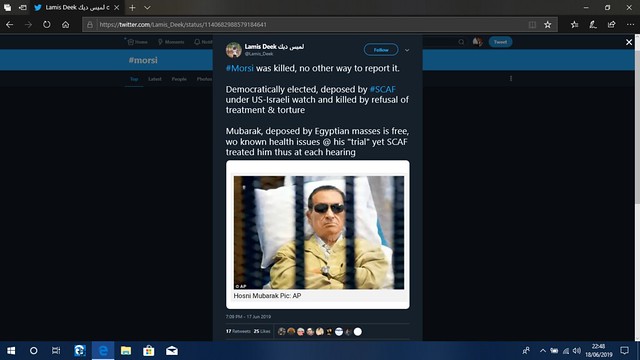 That said, I still stand by my original statement but when one factors into the support he has for Palestinians, while going against the wishes of Israel in the process, and how he was ousted, with the then-future outlook for Egypt and its issues, it is no wonder that folks, for the most part, have a positive view of Mohamed Morsi, but however, when it comes to politics, not everyone is going to agree with everything here, especially due to the wretched political landscape, and the informational tug-of-war that exists in this landscape.

One reply on “Mohamed Morsi: The Political, and Eventual Biological Demise of an Arab Spring-Era Egyptian Politician”

[…] Before watching this video, please read the Mohamed Morsi’s death article here, as the video i… […]